Maternal and Infant Mental Health in Scotland Call to Action

Scotland still lags behind other parts of the UK when it comes to caring for the mental health of expectant and new mothers and their babies.

A group made up of professionals working in the health, charity and education sectors have issued a ten-point call for action by the Scottish Government and NHS Boards to address the fragmented and inadequate level of healthcare provided to many mothers before and directly after their babies are born.

The blueprint, ‘Joining the Dots: a call to action on maternal and infant mental health in Scotland’ which has been published this week, highlights that around 20 per cent of women suffer from anxiety and depression during pregnancy and in the first postnatal year.

Recent NSPCC Scotland research showed that just five out of 14 health boards have a community perinatal mental health team and, despite the large numbers of women affected, help available can depend heavily on the postcode in which mothers live.

The expert group is appealing to the Scottish Government to make use of UK Government funding it has received to address the gaps in Scotland(i). They also want health boards to implement the national clinical guideline on perinatal health published five years ago, which they say is currently not being followed.(ii)

“We’re committed to working with the government and health boards to improve and develop the services that are badly needed.  Investment in community services nationally would tackle stigma and remove barriers to women accessing safe and effective care.”

Matt Forde, national head of service for NSPCC Scotland added: “The link between maternal mental health and child wellbeing is well documented, and yet Scotland is still not doing enough to support the mental health of pregnant women and new mums. We want to see national clinical guidelines implemented in full, along with specific investment like we have seen in England and Wales. Investing in perinatal mental health can help protect two generations at once.”

Professor of midwifery Helen Cheyne of Stirling University, added: “We have particular concerns that women with the most severe problems still do not have equitable access to inpatient care where they can be admitted with their babies. This is something women have a right to in Scotland. We would like to see the recommendations of the recent Mental Welfare Commission report on the inpatient care of women with perinatal mental health disorders being implemented by Health Boards.” 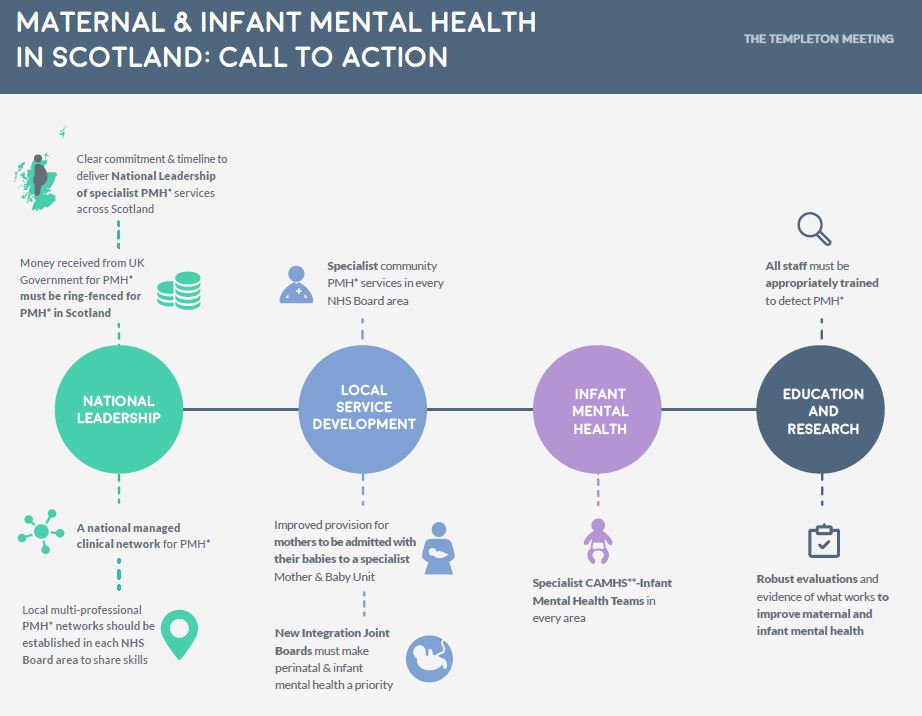 Maternal Mental Health Scotland is a national charity formed by professionals who work with pregnant women, new mums, their families and carers, which works to improve provision and quality of mental health services for this group.

A series of recent reports have highlighted the importance of perinatal mental health and deficiencies in provision in Scotland:

NSPCC Getting it Right for Mothers and Babies research (April 2015) – https://www.nspcc.org.uk/globalassets/documents/research-reports/getting-it-right.pdf

The Scottish Government has not made any commitments to commit this extra resource to perinatal mental health in Scotland. http://www.parliament.scot/parliamentarybusiness/28877.aspx?SearchType=Advance&ReferenceNumbers=S4W-29483&ResultsPerPage=10